From announcing the launch of the contest to revealing the winners, an essay contest offers several public relations opportunities. When we developed the concept of a sportsmanship essay contest to help raise the profile of our client New York Sports Connection (NYSC), this is exactly the type of story we were hoping to uncover.  The organization, founded by Aaron Finkel, helps parents of young athletes keep track of the hundreds of youth sports opportunities in the City’s five boroughs. 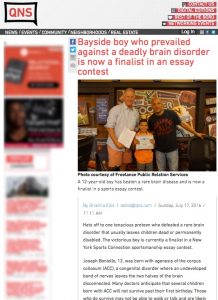 A Queens, NY boy and our client, New York Sports Connection, get the publicity they deserve thanks to a press release from FreelancePR.com.

After we announced the winners of the blind judging, Aaron was surprised to discover that one of the finalists, Joseph Bonillo, 12,  had overcome great odds just to speak and write, much less play sports. As we noted in the press release we wrote,

Joseph was born with agenesis of the corpus collosum (ACC), a rare birth defect in which the two halves of the brain are not connected to each other because the band of nerves called the corpus collosum doesn’t form. His mother, Michelle Boniello, was told after his premature birth that children with his condition may not survive their first birthday. “If they do, they may not develop normally—may not walk, talk, or smile,” she adds. “Many have intellectual impairments or seizure disorders.” But the Bayside resident has beat all odds to become a good student, an avid bowler and baseball player who wants to be a professional bowler when he grows up.

With our help, Joseph’s inspirational story—and his visit to the studio of sports talk radio host Craig Carton, one of the contest judges—attracted the attention of his local newspaper. “Bayside boy who prevailed against a deadly brain disorder is now a finalist in an essay contest” appeared online and in the print edition of the newspaper the week after Joseph’s accomplishment was announced in our press release.

In this PR win, both New York Sports Connection and young Joseph got the recognition they richly deserve.