How Google’s search dominance (and revenues) are shaping our lives 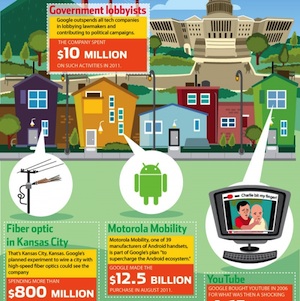 When it comes to search in the United States, Google is the undisputed champion. Despite the success of Yahoo! and Bing, Google still captures nearly two-thirds of all searches conducted in the United States. Canadians use Google for most of their searches. In addition, other English-speaking countries are typically dominated by Google as well. Those in the United Kingdom and Australia are likely to use their native versions of Google, but results are similar in all of these countries. Those in other European countries often use Google as well, and the search engine giant has made great strides to deliver great results in other languages.

Google’s dominance of the search engine landscape has generated an unprecedented cash flow, which Google isn’t shy about spreading around.

Through its investments in a number of other companies and verticals, Google is poised to dominate many aspects life — both online and off. From its purchase of YouTube to its involvement in wind farms and Android handsets, to involvement in RetailMeNot to bankrolling wind farms and fiberoptic networks, Google seems poised to take over the world (and, having invested in the Lunar X Prize effort to land a robot on the Moon — outer space as well.)

There’s no question that Google produces useful services that people want and eagerly adopt (with the possible exception of Google+). So one wonders why the search, etc. giant feels the need to invest $10 million a year in politicians — more than all other tech companies.

Thank you to Best Computer Science Schools for sharing the infographic.

Google’s search engine results dominance had generate a huge revenue stream for the company, and it’s not shy about spreading that cash around.